Nina von Keyserlingk from the University of British Columbia in Canada has been visiting the UK to discuss their latest findings on calf rearing.  Some of their research into how we rear calves can affect their behaviour in later life which is very interesting. Here is a summary of the more salient points.

To suckle or not?

The natural behaviour of a healthy calf with a cow is to suckle for around 47 minutes a day – normally during 6-10 milk feeding sessions.

Calves fed milk via a bucket will on average take only 44 seconds to drink their milk.  But this does not then negate their desire to suck, and so they continue sucking other things for the remaining time – normally the bucket/gate/other calves.  This obviously increases the risk of disease transmission from their environment or other calves.

It has been known for a while that teat feeding stimulates the production of insulin, CCK and gastrin – hormones which are good for the digestion of food.   However, the fact that there is a time sensitive need for a calf to suck is new, and if it is not satisfied whilst drinking milk it will be satisfied sucking elsewhere.

So, teat feeding seems to have a lot of benefits.  Ideally calves need to have a teat each to reduce the risk of cross contamination of disease, so teats need to be disinfected regularly.

How much milk to feed?

They have looked at feeding one level of milk throughout the milk feeding period compared to having a step down milk feeding regime. 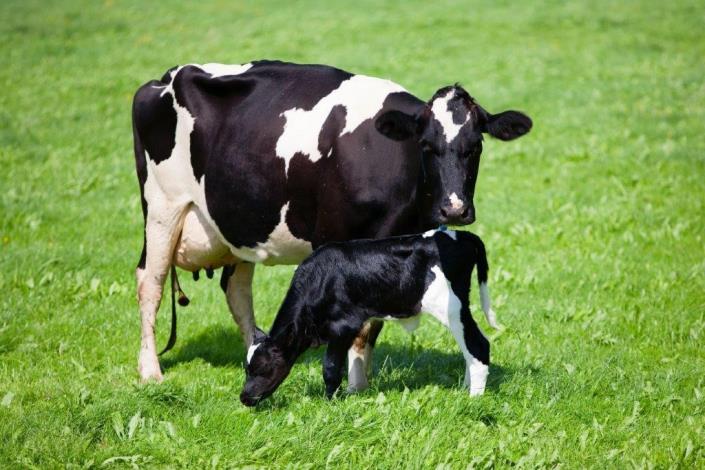 They found that they got better growth rates from those calves that were fed more milk in the first 30 days, and these improvements continued well after the calves had been weaned.

Interestingly neither group ate much calf starter mix in the first 30 days of life, but those that had been fed more milk earlier on had consistently higher calf starter/concentrate intakes from day 30 to day 90.

Intakes of 8 litres milk/day were easily achieved within 7 days of birth, and researchers were able to get intakes of 10-12 litres milk/day when truly ad lib fed. All the work has been done on whole milk rather than milk powder, so this is one area that needs further research. All calves need access to fresh water from day 1 whether on these volumes of milk intake or not.

Although calves did not eat significant amounts of calf starter in the first 30 days of life it was felt it was important to give them access to good quality forage early on, and well before weaning. Feeding the cow TMR to calves works well (as long as there is no caustic wheat in it) during the milk feeding phase. However, if they don’t get access to enough milk they will eat too much forage and become pot bellied.

To rear alone or not?

Much work has been done on looking at calves that were reared in individual pens or paired with another calf. The findings are fascinating. Calves that are reared on their own:

It is thought that some of this can be explained by social facilitation – when one calf gets up to feed it stimulates others to get up and feed too – which can explain the improvements in dry matter intakes. 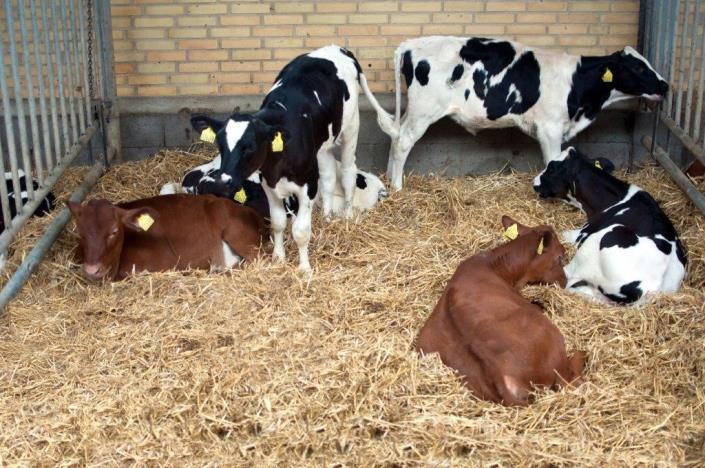 But they have also found that calves housed in pairs start exploring their environment earlier and don’t bother with each other as much, so they end up being animals that are much less fearful and easier to handle and adapt to change.

This can have a big effect on their cognitive function – their ability to learn, socialise and adapt. One very interesting piece of work was that they trained calves to operate a milk feeding system so that they received milk when they pressed a button when the light was white, but delayed feeding if they pressed the button when the light was red.  All calves, whether reared individually or in pairs, took about 4 days to learn what to do.

But then they reversed the rules and the calves only got food when the light was red.  The ones reared in pairs took only 7 days to learn the new rules and get milk intakes back to normal.  The individually reared calves still hadn’t got it after 14 days!

They have also looked at rearing 2 calves side by side so that either their noses can be touching, or their heads can pass through between the 2 pens.  This does not produce the benefits of housing them in pairs, so it seems to be that they need total body contact to acquire these benefits.

So, calves reared in individual pens do not seem to become flexible learners, are harder to handle and do not adapt to diet and management changes compared to those calves reared in groups.

Of course, rearing calves in groups can have its risks:

It was suggested for these reasons that groups sizes of no more than 8 were recommended, and that calves are inspected regularly for gut fill/health issues and taken out if necessary.

We cannot do a newsletter on calf rearing without mentioning feeding colostrum!.

Colostrum intake is vital, but this should be managed rather than taken for granted to ensure calves receive enough at the right time.  Ideally, they should be given 4 litres colostrum within 3 - 6 hours of birth.   A further 3-4 litres colostrum should them be given 8-12 hours later.

Colostrum quality can be variable, but you can purchase a colostrometer which will measure this – ideally use colostrum greater than 50 mg/ml.

When pooling colostrum you need to be aware of the risks of spreading Johne’s disease, mycoplasma or salmonella.

So, which is the best way to rear my calves?

« Benchmarking your Business
The Dairy Show 2017 »