Whilst reductions in milk price for 2014 were anticipated, the speed and ferocity of the reductions have nevertheless been shocking.

For those farmers on aligned and liquid based contracts, margins will be protected to a certain degree. Those farmers’ whose milk buyers are reliant on commodity markets such as First Milk, will not fare so well.

Farm gate prices for winter 2014 will depend on the segment of the market you are supplying. Below are some guide prices based on the news issued in recent days from milkprices.com

The prices mirror the decline in milk wholesale price as shown below: 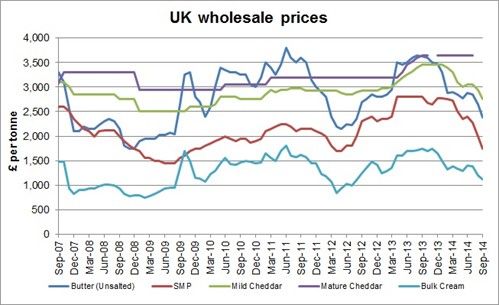 The extent of further reductions is difficult to predict, but for those on aligned contracts much will depend on how much the buyers truly value a dedicated and aligned supply. The slump in prices is forecast by many to be sustained throughout 2015 16.

What has been the cause of the reduction in the price?

With improvements in milk price during 2013 and the good weather, milk production has been buoyant both here and globally. In the first half of 2014 EU milk production was up 5%, New Zealand was up 8.4%, USA was up 1.4% and in the UK & Ireland it was 8.4% higher.

Whether we like it or not we operate in a global dairy market therefore are not immune to what is happening elsewhere. Although global exports account for a small percentage of milk produced, it has a massive impact on farm gate price.

With the continued good weather and plentiful forage supplies, there is no sign on the horizon of milk supply falling in the short term.

Milk quotas in Europe end in March and it is likely this will fuel further production and so exert further pressure on price. This additional volume will impact price negatively for a significant period of time.

China has previously been very active importing dairy products, particularly during the period October 13 – March 14. But their imports have now reduced and this is having a dramatic effect on the Global Dairy Market auction prices.

Russia is a major importer of EU dairy products and the trade ban has put significant pressure on dairy markets, particularly cheese.

The EU Commission opened up Private Storage Aid as a short term solution following the Russian trade ban for butter, cheese and powder. But it was closed for cheese just 18 days after opening due to too many countries using it that were not traditionally exporting cheese to Russia.

Short term storage is no answer to recovery as at some point the product has to come back onto the market, so this only delays market prices getting back to where they need to be.

Throughout the summer, the pound has been stronger against the euro, and therefore it is making it harder to export from the UK, and more importantly it makes it cheaper to import from the EU.

Pressure exerted by the likes of Lidl and Aldi on the big 4 has led to massive discounting of milk and the ubiquitous 4 pints for a pound. Whilst buyers say that farm gate prices will be insulated from this, there is no doubt that significant value is being lost for the industry as a whole.

Further details on how to react will be published shortly.  If you would like any further information, please call Douglas Green on 01666 817278 or email us